Casual Sitting in the Business Lounge 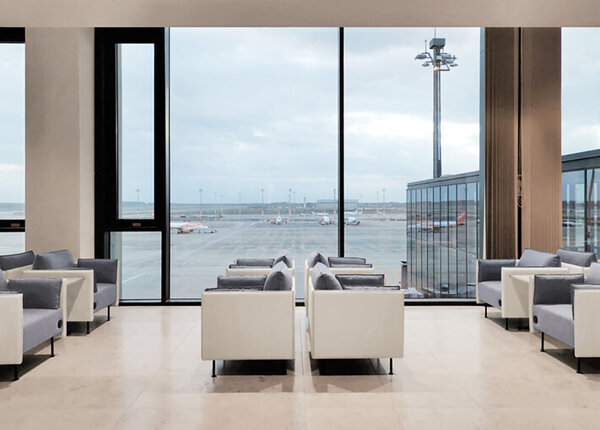 Boasting a great level of knowhow in the field of fire prevention and after having developed many inventive features – Kusch+Co furnishes two lounges at the BER airport Berlin Brandenburg with their customised design seating.

The interior design concept for the Tegel lounge and Tempelhof lounge in the new Berlin airport, the airport Berlin Brandenburg Willy Brandt (BER) was worked out in close co-operation with the architect’s office Synarchitects. They selected the series Creva soft from Kusch+Co, offering a multitude of distinct variations and options.

The Tegel Lounge and the Tempelhof Lounge, the business lounges at the new airport Berlin Brandenburg Willy Brandt (BER) in the German capital, are both named after the former Berlin airports. Both the Tegel Lounge as well as the Tempelhof Lounge have been furnished by Kusch+Co, an internationally operating contract seating specialist located in the German town of Hallenberg and affiliated with the Nowy Styl business group. The detailed interior design concept was worked out in close co-operation with the architects’ office Synarchitects, who extolled Kusch+Co’s knowhow in the field of fire prevention and their inventive details designed to improve the user experience significantly. Whereas the Tempelhof Lounge has already opened their doors for guests, the Tegel Lounge is slated to welcome the first visitors in the spring of 2021.

Guests can look forward to a pleasant stay in these business lounges, enjoying a stylish, comfortable and exclusive interior. Some features, geared towards the guests’ safety and well-being, are invisibly incorporated, such as the fact that the seating variations all meet the stringent fire prevention standards and provide the best possible hygienic safety in these times dominated by a global pandemic. Kusch+Co was among the elite circle of suppliers of upmarket seating capable of fulfilling all the criteria. This company has gained worldwide acclaim for having furnished a multitude of international airports and their global network of architects and interior designers. Their latest projects are the two business lounges at BER airport, namely the Tegel and the Tempelhof lounges: the latter was opened at the end of November 2020 whereas the Tegel lounge is scheduled to welcome the first guests in the spring of 2021.

Product variety and an expert in the field of fire prevention
Both lounges are perks for entitled customers (i.e. status customers) or paying customers in case the airlines don’t have their own lounges. The Tempelhof Lounge is located in Terminal 1 in the Schengen area of the departure level in the southern Main Pier: the Tegel lounge is situated on the same floor in the norther Main Pier. In total, the Tempelhof lounge provides round about 200 seats across an area of 910 square metres, though currently limited to 130 seats. The somewhat smaller Tegel lounge, stretching over 600 square metres, can accommodate up to 180 persons. The colour and interior design concept of both lounges references the former Berlin airports they are named after.

Thomas Pöllmann, Business Development Key Account at Kusch+Co and responsible project manager for both lounges, underlines that the immense product diversity from Kusch+Co as well as their fire prevention competence were pivotal selling points for awarding the contract to the Hallenberg-based company. Thanks to past projects, Kusch+Co had established a long-time and trustful relationship to the airport operator. The interior design concept was meticulously worked out in co-operation with the Berlin- and Beijing-based office Synarchitects. Daniel Schwabe, company owner of Synarchitects, describes the co-operation with Kusch+Co as “extremely efficient and inspiring”.

Elegance and cosiness
The interior design concept of both lounges is based on the strict zoning of the different areas, e.g. reception, lounge, dining, resting and conference rooms, allocating a distinct set of materials and colours to each zone. The colour schemes of the former Berlin airports Tempelhof and Tegel were updated to create a modern setting. “The seating from Kusch+Co is characterised by a timeless and unobtrusive design and a high recognition value. With these attributes, we were able to implement the sought-after modern elegance and cosiness for the lounges,” explains Daniel Schwabe.

The airport operator as well as the architects wanted to make sure that the different materials and colours were tailored to the architectural design concept. The selection of the fitting seating to create just the right lounge atmosphere was the focal point in the process. For this reason, they opted for the compact-sized and comfortable series Creva soft, available with a great variety of different variations, such as the possibility to choose between a low and a high backrest. On top of this, the optional extras for this series include power modules as well as storage tops. “We intentionally wished for small armrests, so that no one would place his cup of coffee here, tip it over and spill the content on the upholstery, as is often the case with lounge seating featuring wide armrests. Instead, in close consultation with the architects, we came up with several easy solutions at short notice,” reports Thomas Pöllmann. Espresso and snacks can be placed on the harmoniously incorporated top between two armchairs.

Relaxation on a Kusch+Co design classic
A special solution was developed for a design classic, the well-known Colani lounger. This design from the 1960s by Luigi Colani for Kusch+Co was covered with a special fabric for the Tempelhof lounge with the aim of meeting the current fire prevention standards. From this vantage point, guests are able to enjoy the view in a relaxing posture through the floor-to-ceiling panoramic windows.

Comfort for all guests
The special knowhow with regard to the exacting fire prevention requirements specifically for airports as well as the capability to technically implement these requirements give Kusch+Co a cutting edge over their competitors. Some features, such as the incorporation of power and data modules directly in the armchairs, lift the user experience to a new level,” confirms Daniel Schwabe adamantly, adding in the same breath:” Kusch+Co succeeded, despite the extreme time pressure, to develop and realise new technical and design solutions beyond their standard product range.” Besides Creva soft and the Colani Collection – the latter only in the Tempelhof lounge – the lounges are furnished with a wide variety of other lounge armchairs, side chairs and stools selected from the multifaceted Kusch+Co portfolio, among other things the Comta high tables.